The statistics on women and girls in Afghanistan are appalling.  Only 21% of girls complete primary education, less than 13% are literate and the country’s maternal mortality rate is one of the highest in the world.  Despite a new constitution, adopted in 2004, which recognizes women as equal citizens under the law, for most women in Afghanistan, little has changed since the days of the Taliban.  In many parts of the country, women and girls are too often victims of violence with few prospects for a brighter future.   Yet, in between all the dark statistics there is humanity and there are exceptions.  Talking with Alka Sadat, I found both.  Here is her story. 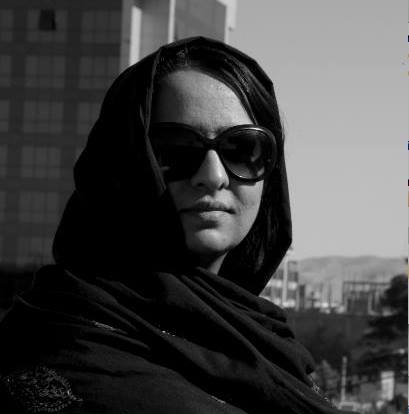 A light in the dark

Alka and Roya Sadat are sisters living in Afghanistan.  They are award winning documentary filmmakers and they own and operate “Roya Film House,” an independent Afghan film and production company.  Their films and T.V. dramas explore social issues and injustices, drawing attention to the challenges faced by Afghan women and children.

Born in Herat, Afghanistan, Alka was a young child when the Taliban came to power.  She shared what it was like at that time.  “I could not go to school, I could not do anything.”  During those years, her mother, not wanting her daughters to go uneducated, broke the law by teaching them at home. While the Taliban fought to destroy film and art in Afghanistan, Alka dreamed of becoming a journalist and her sister Roya read handbooks on filmmaking.  She told me, “We would close the blackout curtains and watch movies in secret under the table.”  Alka’s favorite movie was the Titanic.  “It was full of humanity, suffering, romance, love and hope.  It was an escape to a different world.”

When the Taliban regime was abolished, Alka went to school for the first time.  “It was the most amazing day.  I dreamed and dreamed of going to school–and then it happened.  There were lots of other girls in white scarfs and black school uniforms walking down the street that first day.  We were finally free and there was no Taliban to stop us.”  Alka never stopped dreaming and she eventually found her voice in film.  “When I was 16 or 17, I started working with my sister.  I was still in school, but when I started working, I started raising my voice.  It was a dream to speak about women’s issues.”

Listening to Alka talk was inspiring.  I wanted to cheer her on!  But I also wanted to know, how was it possible for two young women in Afghanistan to make movies about issues affecting women?  Alka said, “It was hard.  But it all started with “Three Dots,” a movie that Alka’s sister Roya was determined to make.  Shortly after the Taliban regime was ousted, Roya sent the script she had written for Three Dots to Afghan director Siddik Barmak.  Barmak thought Roya's film project was worth supporting and found a Japanese production company to fund "Three Dots–Se Noughta."

It would never have been possible without the permission and support of their father.  “It was a struggle at first.  Father was very sad.  He did not want to see his daughters in danger and it was dangerous.”  But Roya was resolute and finally convinced her father to support her.

"Three Dots" was revolutionary. It was taboo.  The film illustrated the story of an Afghan woman living on the Iranian border caught in the violence of war and subject to the brutal rule of the Khans who controlled the region.  Alka said, “Making the film was very difficult.  There were numerous threats of violence and Roya spent months looking for a female actress to play the lead role.”

Alka, left, accepting her award at the 2013 Aljazeera International Documentary Film Festival."Three Dots" won international acclaim and was ultimately sold to the Afghan Human Rights Office.  With the proceeds, Roya bought her first camera and in 2003, Roya Film House was founded.  Roya went to work for a television station in Kabul, working on T.V. dramas and saving money to buy more equipment.  Alka explained, “We make money on the T.V. dramas, but it is also a way to reach more people.  Afghans watch shows from Turkey and India, but now they have their own Afghan dramas. If we like the subject we do it.  For example, for youth in Afghanistan we created a T.V. drama about how friendships are formed between boys and girls.”

Over the last decade, Alka has been busy creating documentary films and has won award after award for her work.  Alka likes working on documentaries.  “It is not about acting.  It is real life and real things that people should know about.  Once I was filming in Bakhshan city and wanted to do some more filming in a nearby village in the mountains.  It was only a five-minute walk, but there was a man who told me that I would be killed if I went there because I was not wearing a burqa. He suggested it would be much better if I stopped working and stayed at home.”

A voice for women

Alka’s 2008 film “Half Value Life,” explored how the extreme laws enacted under the Taliban perpetuate violence against women.  Alka titled the film, "Half Value Life," because she believes that, “women's lives are rarely valued completely.” The film received six festival awards including the Liberties & Human Rights Award, Aljazeera International Documentary Film Festival (2011) and First Place, Documentaries, Women’s Voices Now Film Festival, Los Angeles (2011).  Alka told me, “I am glad there is a time now in Afghanistan where we can work and speak about difficult subjects.  I hope we will get even more freedom in the future and will be able to make more films.”

Alka now lives with her sister in Kabul.  “Attitudes in Kabul are different than in the rest of the country, but it is still very unusual for women to live apart from their families.  Our family is a good family; they support us.  But it is still very difficult.” Roya is now married and has several children.  Yet, Alka confided that she does not believe an arranged marriage will work for her.  “I am always worried about finding a man that could support my work and accept my independence.”

Watch the full version of "Half Value Life"

Bpeace provided creative consulting on developing the movie poster and trailer.In her latest project, Alka is taking a new direction–a film about Afghan soldiers.  She explained, “I had many questions when I started.  We lose so many people. I wanted to understand why people want to join the army.  I wanted to know how they live together with so many different tribes and ethnic groups.”  Alka was warned that this was a film she would not be able to make.  But for Alka, “When they say you can’t, I say I can.” And she did. Through the Ministry of Defense, Alka found a Special Forces group and spent the next 2 years, working alongside them to make her movie.

“Making this film changed my mind.  The soldiers were not there to make money. They were people who loved their country.  Many of them had returned to Afghanistan to fight for freedom.  They were from different regions, tribes and ethnic groups, living together as friends.  We don’t have problems between people, rather we see problems between groups. There is war because there are uneducated people who speak different languages and don’t understand.”

Alka wants the Afghan people to see who their army is.  “If they watch this film, it will personalize it for them.  It will bring people closer to the army.  The soldiers are human.  They have families and are in love.” During the filming, one of the soldiers in the unit was killed during a night raid.  Alka recounted, “Younes was from Jalalabad.  He was very funny and very talkative.  He had plans for his life.  After four years of being in the army he was planning to leave.  He had three daughters ages six months, three years and four years.  He spoke about them often.  He wanted them to go to school and be free.  But Jalalabad is a closed city for women.”  Alka shared his last words.  “It comes from God if I die–but I am very worried about my family.”

At South Asia Summit on Youth and Human Rights 2014

In 2013, Roya and Alka founded the Herat International Film Festival.  Their goal was to expose international films to more people.  Alka explained, “In Afghanistan, we do not have cinemas, so we wanted to make international films more available.  We chose Herat as the venue because it is a place where women do not really come out of their homes.  We wanted to give them an opportunity to see serious movies and a chance to see the situation of women in other countries.  It is important for people to connect with each other.”  Films about resilience and about Afghan women picking up the pieces of their lives, devastated by war, and moving forward dominated the lineup.  The festival attracted many families.  Fathers and husbands brought their wives and daughters. “They stepped out to watch our festival.  Nothing could have given me more pleasure and joy.” Alka enthusiastically predicted this year’s festival, scheduled for Fall 2014, will be even bigger and will include a workshop for young filmmakers.

Given the chance to have lunch with anyone in the world, Alka would pick James Cameron.  She still loves the Titanic.  “His work,” she said “is always amazing to me.  It is always a different idea, very human, very close to the heart.”

With her award at the 2013 Aljazeera International Documentary Film Festival

I was struck by Alka’s own approach to using film to humanize social issues, bridge divides, build empathy and create opportunities for people to learn, connect, and take action.  Sometimes it is easy to overlook the very real and transformative effect that film can have on the world.  Beyond just transporting viewers into new worlds and fantasies, film has the power to shed light on an issue, tell a story and chronicle history.  Ten years from now, Alka wants her headline to read, “The girl who simply dreamed of going to school, now stands tall, bravely telling the stories of Afghan women to the world through film.”  She need not wait 10 years.  She has already arrived and should inspire us all to say, “We can.”

You can read here about the awards and success of Roya Sadat, Alka’s sister and partner in Roya Film House.